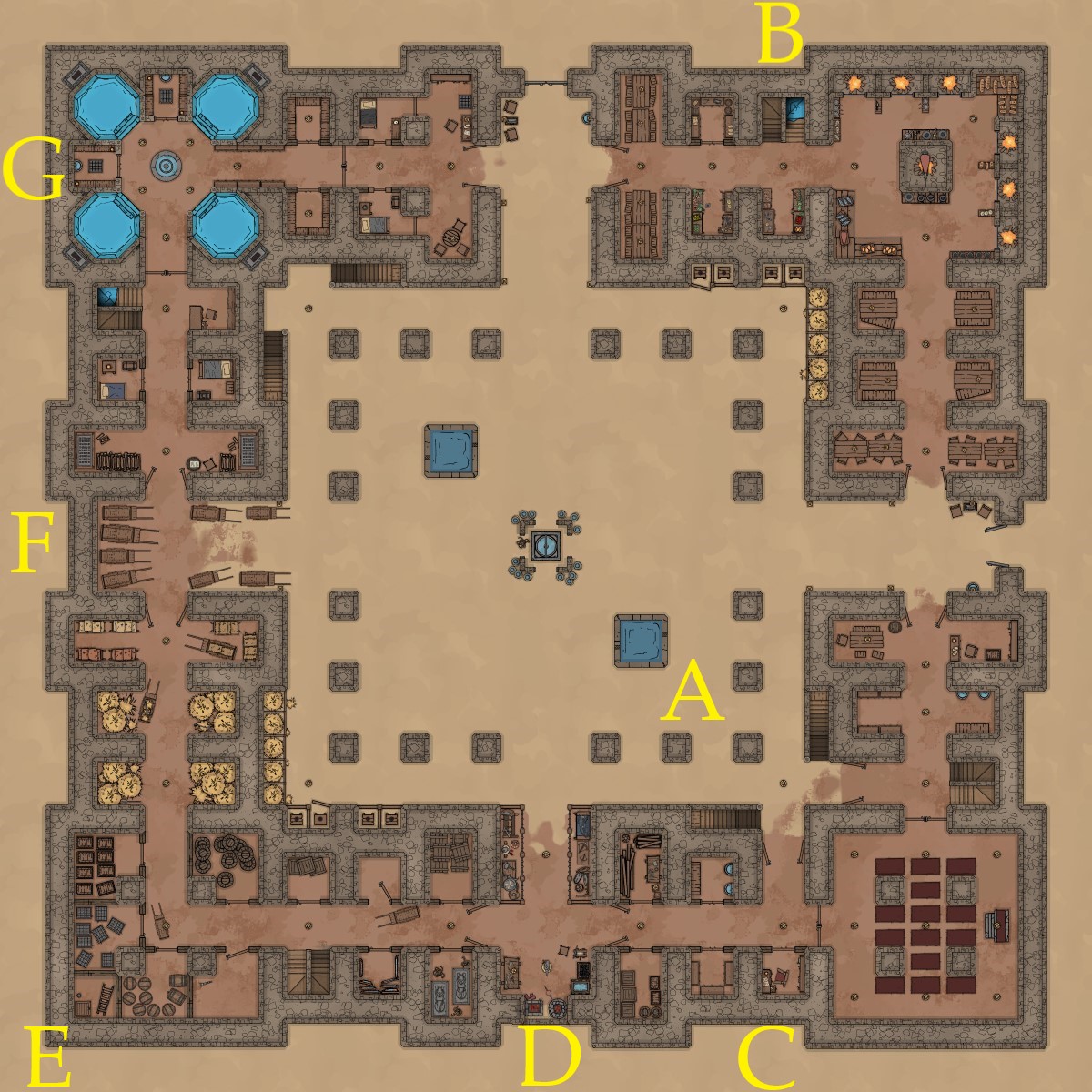 The courtyard is a 110-foot by 110-foot square open arcade with a dusty compacted sand floor. Columns line the quadrants of the courtyard, supporting a balcony on the first floor. There are two decorative pools in the courtyard, and an ornate fountain at its center.

Staircases leading up from the courtyard connect to the first floor balcony.

A single cooking fire is just going out, but the kitchen appears otherwise unused. Some cured meats lay about on tables, and a large cooked roast rests above a cold fire pit.

Food taken from the Kitchen and Prep Area (B.1) is safe for consumption, if a bit stale or old.

Tables stocked with knives and other cooking implements line the alcoves adjacent to the kitchen. A successful DC 10 Investigation check will reveal remains -- crumbs, moist spots, and dirty utensils -- of a recently and hastily prepared meal.

This meal was prepared by Alon Ranjhan, a priest of Methis who has sequestered himself in the Temple on the ground floor since Delirium and other abberant servants of the Old Man of the Sea descended upon the market.

The Scorching Dunes are insular, its harsh geographic boundaries serving to separate its culture sharply from the surrounding regions. One unique cultural fixture is Methis, patron goddess of trade. Worshipped casually almost universally throughout the Dunes, she is typically depicted as a regal, tall woman with intelligent, calculating eyes and sharp features, crowned with a close-shaven crop of the shock-white hair typical of Dunes natives.

Her virtues are shrewd negotiation (although stopping short of trickery or bribery), discerning value, and propriety. Her symbols are the scales, rose gold (which is typically reserved for artifacts and jewelry related to Methis), and clasped hands.

Though modest, the high ceilings and softly burning lamps give the temple a sense of comfort. Priest of Methis Alon Ranjhan has survived by holing up in the temple and it's adjacent alcoves, which serve as safe refuge in the otherwise weird and dangerous areas of the market.

It was he who prepared the meal in Area B, the Kitchen. Though initially cautious, he will warm to the sight of relatively friendly and sane company. So long as nothing is done to threaten Alon or the temple, it will remain a safe haven where the party can rest, and a safe place to stash newly-revived crew members.

Within the temple, on one of the pews, rests the vessel of Tristin, an elf and former member of Helbram's crew. If the Captain approaches the vessel, Tristin's soul will transfer itself from his flask to the empty body. Tristin returns to life as if revived by the Resurrection spell, suffering a -4 penalty to all attack rolls, saving throws, and ability checks.

If asked how Tristin arrived at the temple, Alon will truthfully state that he found Tristin's body upon returning to the Temple after an excursion for supplies. The body was freezing cold and soaked in salt water, but otherwise unblemished and appeared to be under effects identical to the Gentle Repose spell.

Characters that entreat Methis for aid or offer an appropriate tithe to her shrine will recieve aid in the form of coins with clasped hands emblazoned on them along helpful or beneficial paths. The coins can be spent as mundane GP, and have no inherent magical properties.

Particularly moving prayers or meaningful offerings may be rewarded with the Tomb Key, a relic of Methis that allows creatures to open the Founder's tombs in the cellar without consequence. In this case, the Tomb Key will appear in the pocked of the creature making the offering or prayer. It is an old, burnished key plated with rose gold, and etched with the names of Eight Roads' Founders.

A set of tables lined with tools, trinket, gears, and half-finished mechanical devices.

A set of Tinker's Tools can be recovered from the workshop. A successful DC 19 investigation check will reveal a hidden drawer in one of the work tables containing Gunsmith's Tools and the hand-held Blunderbuss firearm Dragoon.

The storehouse contains sections of dry luxury goods -- casks of ale, bags of spices, and bales of cloth.

A successful DC 22 Investigation check will reveal that drugs are being smuggled in the spice barrels. Roll on the Vices Table to determine the type of drug being smuggled, and 2d4 for the amount of doses.

Hidden behind the walls of two storage areas in the southwest corner is a small secret room, containing a trapdoor to the Cellar. A successful DC 20 Investigation or Perception check will reveal the area -- Investigation by observing dimensions of the room, and by tapping the adjacent walls, and Perception by noticing a small animal scurrying beyond the adjacent walls.

Empty carts line the area. A DC 26 Investigation check will reveal a false bottom to one of the carts; contained within is Vrilock, a sentient flail.

The Bathhouse are closed off from the rest of the Ground Floor by two wooden doors identical to those on the exterior of the Market, locked in the same manner. Water can be seen flowing slowly beneath the doors, and a successful DC 12 Perception check (or Passive Wisdom > 12) will clue characters into splashing footsteps audible on the other side of the doors.

Within the Bathhouse lurk six Prawns, who will attempt to grapple and drown characters who venture into the area.

A magic item can be thrown to distract the Prawns, who will pursue the object and attempt to sequester it in the Northwest bath.

The Northwest bath contains a corpse, partially consumed by the Prawns. Should the characters find a way to extricate the items from the water, the corpse's loot includes:

The small set of quarters to the east, leading to the kitchens, appears to have been unused for quite a while. A layer of dust covers the furnishings in both rooms.

The small office on the east side of the area has papers scattered about; a stopped inkwell and quill lay out on the desk as well.

Most of the documents appear to be accounting records of the trading post, or other transaction-related contracts and ledgers.

The bookshelf on the north wall contains volumes of records from the outpost, dating back generations.

Tucked between two of these volumes is a Manual of Gainful Exercise.

The downward stairway to the west appears to descend into deep, murky water after the first few steps. The northern doors leading to the Bathhouse are barricaded; water seeps from beneath the doors.

In the western bedroom is another vessel, this one belonging to Hera Hellhath. Similar to Tristin, she is icy cold and soaked with salt water; upon her soul being returned, she returns to life in the same manner.